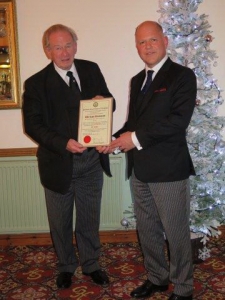 On Monday the 30th November a Provincial delegation of 20 Acting Officers, led by the Grand Superintendent, attended a very special meeting of St Oswald Chapter No. 850.

The evening was a double celebration; to witness the exaltation ceremony of St. Oswald Chapter’s newest member Comp. Mark John Lee; and to present a 50 Year Certificate of outstanding service in the Royal Arch to one of their founding members, EComp. William (Bill) Summers, PGStB.

In presenting the certificate the Grand Superintendent gave a brief history of Bill’s personal life, his work all over the world and his very busy Masonic career spanning 61 years. He also offered a belated Happy Birthday to Bill, who had been born one day and a number of years previously.

Bill was exalted in the Chapter of Unity No 4841 in Derby on the 4th October 1965, joined the Burlington Chapter No 6736 in 1982 and the St Oswald Chapter in 1968 (being the founding Director of Ceremonies). He is also a Past Principal of the Derbyshire Installed Principals Chapter No 8509.

The festive board was afterwards held at the Royal Oak Inn at Mayfield, where the First Principal of the Chapter, EComp. Frank Dawson presented Bill with a Brandy Glass and a Special Brandy to go in it.
Frank paid tribute to Bill for all the commitment and guidance he had given to the Chapter over the last 29 years and to the wise counsels Bill had given to him personally. EComp. Summers was, unusually, almost at a loss for words, but assured us all that he had been privileged to be able to serve the Royal Arch for 50 years so far.

It was a delightful occasion for all; and after EComp. Tony Higton had misplaced his car keys, Comp. Lee quickly proved his credentials by taking Tony and his passengers home, then taking him all the way back to Ashbourne with his spare keys to retrieve his car. The keys were found the following day in a masonic case (not Tony’s)!

The Most Excellent Grand Superintendent, the 3 Principals and EComp. Summers